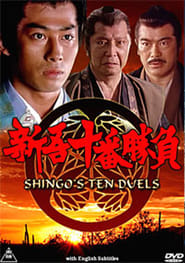 The classic tale of the shogun’s illegitimate son Aoi Shingo is told in three parts as he strives to become the greatest fencer in Japan, while his father Shogun Tokugawa Yoshimune seeks to reunite with his lost son. When the secrets of Shingo’s birth are revealed to him, it sets off a series of events that bring him to cross swords with members of the shogun’s inner circle in a series of duels that could change the destiny of Japan.

Profound Desires of the Gods