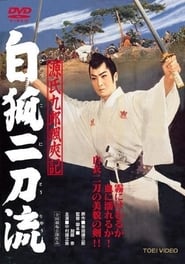 Thanks to a secret message hidden on the two sacred swords Kaen and Suien, the samurai Genji Kurô (Nakamura Kinnosuke) found the hidden treasure of Lord Yoshitsune. When he gives a piece of the treasure to a couple of poor but honest people so they can pay their debts, it attracts the unwanted attention of several dishonest people, such as pirates, greedy merchants and rebels. While the government is fighting a battle for power against rebels and royalists, all want the treasure by any means possible.