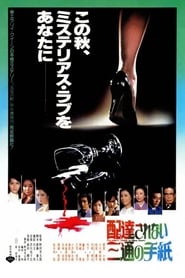 Noriko had been engaged to marry Toshiyuki Fujimura, who worked at her father’s bank. One day however, Fujimura mysteriously disappears. From that day, Noriko keeps herself locked up in her room. After three years of Noriko shutting herself up like a doll without a soul, Fujimura suddenly returns. Noriko’s family’s first reaction was strong rejection, but Noriko asks no questions and embraces him warmly. One day, as Noriko is cleaning her husband’s room, three envelopes accidentally fall from the pages of one of the books she had picked up. The first letter is dated August 11th, saying that his wife had suddenly taken ill. The second, dated August 20th, says that his wife is now critically sick, and the third letter, dated September 1st, is an announcement of his wife’s death. The wife is obviously Noriko, but she is alive and well. Do the letters then mean a preliminary notice of Noriko’s death?