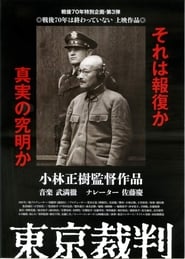 One of the major documentaries on a specific chapter in modern Japanese history, this look at the trial of Japanese militarists accused of war crimes is excellently handled by director Masaki Kobayashi. Kobayashi and his assistants had to plough through 30,000 reels from the proceedings of the International Military Tribunal which took place between May, 1946 and November, 1948. It took two days to read the charges against the 100 alleged war criminals in the docket (only 28 top officials are actually in the courtroom, which was limited in space), and the final judgment took one week to read.

Three Women of the North

Under the Flag of the Rising Sun

The Sea and Poison