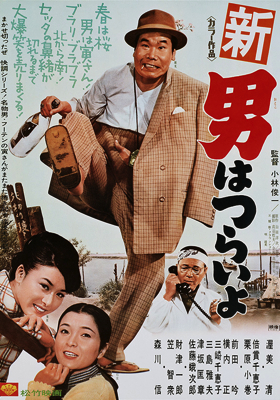 Tora-san offers a free trip to Hawaii to his uncle and wife who took care of him and his sister after his father’s death. But not until they arrive at the airport do they learn that the travel agent has run away with their money. Ashamed and fearing that they will be a laughing stock for their neighbors, they decided to creep into their house after dark. But a petty thief breaks into their house, thinking that they have left for Hawaii. They must now decide whether to capture and turn in the thief–and publicly admit that their vacation fell through–or somehow let him go about his business and try to keep their secret.

Otoko wa tsurai yo: Naniwa no koi no Torajirô