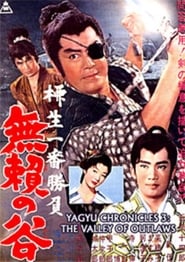 This time, sword-saint Yagyu Jubei battles the evil corruption in Akizuki Village, with the help of his friend, a samurai named Matashichiro. This spaghetti western style action swordplay film is exciting and dynamic from start to finish! One-eyed master of martial arts, Yagyu Jubei visits Akizuki Village and meets with his former teacher Akizuki Hayato-no-Kami. Jubei is shocked to see Hayato’s sickly appearance. An evil gang has plotted to murder Hayato, but a deadly Yagyu blade will unleash a rain of blood and disperse the evil plot! The breathtaking climax in a huge ravine called Okamidani is the ultimiate pay-off. Jubei confronts several hundred riflemen and warriors in a bloody battle to the death.

The Blue Mountains: Part I

A Fugitive from the Past