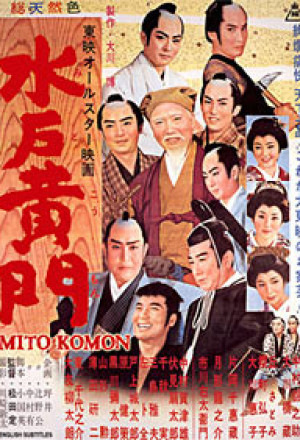 In 1691 a terrible fire broke out in Denmacho, Yotsuya, burning down the towns around it, up to the shores of Shibaura. A month and a half later, another fire broke out, this time in Komagome, burning down the two gates of Asakusa and Sujikai, and continuing on into the night. As the government Elders consider evidence that these fires were arson, a fire breaks out in Hirakawa-cho, outside of Hanzo Gate. Nishonmaru catches on fire and burns down completely. When this rash of fires even strikes Kyoto, the task of finding who’s behind the arson, and stopping them falls to the Shogun’s uncle, the Elder Lord of Mito. Together with his trusted bodyguards, Kaku and Suke, the trio set of to save Japan from this scourge of evil. Featuring virtually all of their most famous stars, this is the best film in the Toei series about Mito Komon, one of Japan’s most popular historical figures who traveled through the country incognito to check on the people and fight injustice.

The Edo Official and Apprentice