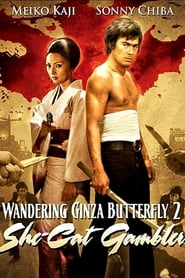 Meiko Kaji reprises her role as Nami, a vengeful female gang leader, in the second installment of this high-action series that casts a new actor — martial arts legend Sonny Chiba — in the role of Nami’s loyal friend Ryuji. This time around, Nami is looking for Hoshiden, the man who murdered her father and shattered her once-hopeful childhood. But living under an assumed name, Hoshiden could stay hidden forever.

Achilles and the Tortoise