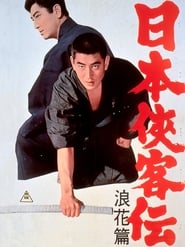 Second film of Makino’s Nihon Kyokakuden series set in Osaka’s harbor. The series also known as “The Domain” Each a stand alone film in it’s own, none are connected other than starring the famous Ken Takakura as the main Character. This story begins with Ken Takakura’s character coming to Osaka after his brother’s death. Another exciting yakuza story with superb yakuza action!!

An Attraction to Girl Paradise