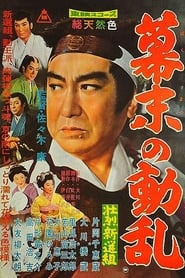 The stormy tale of the Shinsengumi is told from its birth by master filmmaker Sasaki Yasushi, with an all-star cast based on the original story by Shirai Kyoji. The battles between the royalists and Shogunate supporters come to a fever pitch during the Gion Festival as the exclusionists plot to burn Kyoto and kidnap the Emperor. From its earliest beginnings as a group of ronin brought from Edo to protect the Shogun when he is in Kyoto to see His Imperial Highness, the group had to face difficulties both from within and without. Commander Serizawa Kamo’s corrupt practices threaten the group’s very existence, as they try to recover from the bad reputation he left them with. Their redemption comes when they learn of Katsura Kogoro plans to gather men at Kyoto’s Ikedaya Inn for his attack on the city. Along with Hijikata Toshizo and Okita Soji, Kondo leads the group in an attempt to save Japan from the rebels.

Women of the Night