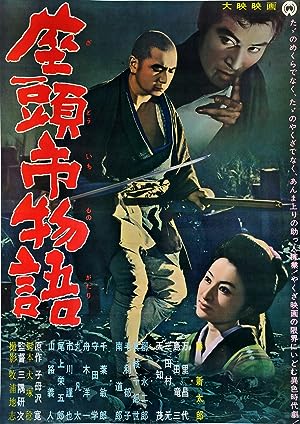 An impoverished blind masseur becomes a mercenary swordsman, to gain basic respect. The first of novelist Kan Shimozawa’s Zatoichi series: 26 films, a TV series and a play, all but two starring controversial singer/producer/director Shintaro Katsu. First of six Zatoichi films directed by Kenji Misumi. The shrewd Zatoichi targets a yakuza-controlled village, because war with a neighboring town’s smaller gang is brewing. The broke ex-masseur “Ichi” immediately wins big, by taking advantage of local bakuto’s cheating, after they scoff at his asking to join a dice game. The larger horde, who have been given carte blanche by the local governor, summoned Zatoichi. Zatoichi hates the fact that he’s become an outlaw, so he strikes up a friendship with the other gang’s honorable hired samurai, who has TB. Written by David Stevens